It is that time of year again. Yes if you live in Japan it is not April first a solitary day that is important. It is the month of April that is important. Because at this point and time of the year the cherry blossoms start to bloom. 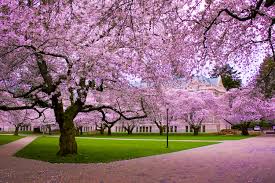 Towns, cities, the country seems to be in a festive mood and everyone and their mother are out in full force to sit under the trees, eat to excess, drink past excess and enjoy life.

If you are single it is one of the best times to meet a significant other. That is unless you are like me and have anxiety around large crowds of people you don’t know, and also have hay fever. But besides that you can go out to one of the countless festivals and or celebrations and enjoy the cherry blossoms.

They are beautiful I must say that but for me I have always been fond of Orange Blossoms, but that has to do more with the memories I associate with the flower.

By Jin Okubo author of Love.

Below you will find an excerpt from the wiki page. Please enjoy it.

“Hanami” is the centuries-old practice of picnicking under a blooming sakura or ume tree. The custom is said to have started during the Nara Period (710–794) when it was ume blossoms that people admired in the beginning. But by the Heian Period (794–1185), cherry blossoms came to attract more attention and hanami was synonymous with sakura.[7] From then on, in both waka and haiku, “flowers” (花 hana?) meant “cherry blossoms”. The custom was originally limited to the elite of the Imperial Court, but soon spread to samurai society and, by the Edo period, to the common people as well. Tokugawa Yoshimune planted areas of cherry blossom trees to encourage this. Under the sakura trees, people had lunch and drank sake in cheerful feasts.

Every year the Japanese Meteorological Agency and the public track the sakura zensen (cherry blossom front) as it moves northward up the archipelago with the approach of warmer weather via nightly forecasts following the weather segment of news programs. The blossoming begins in Okinawa in January and typically reaches Kyoto and Tokyo at the end of March or the beginning of April. It proceeds into areas at the higher altitudes and northward, arriving in Hokkaidō a few weeks later. Japanese pay close attention to these forecasts and turn out in large numbers at parks, shrines, and temples with family and friends to hold flower-viewing parties. Hanami festivals celebrate the beauty of the cherry blossom and for many are a chance to relax and enjoy the beautiful view. The custom of hanami dates back many centuries in Japan. The eighth-century chronicle Nihon Shoki (日本書紀) records hanami festivals being held as early as the third century AD.

Most Japanese schools and public buildings have cherry blossom trees outside of them. Since the fiscal and school year both begin in April, in many parts of Honshū, the first day of work or school coincides with the cherry blossom season.